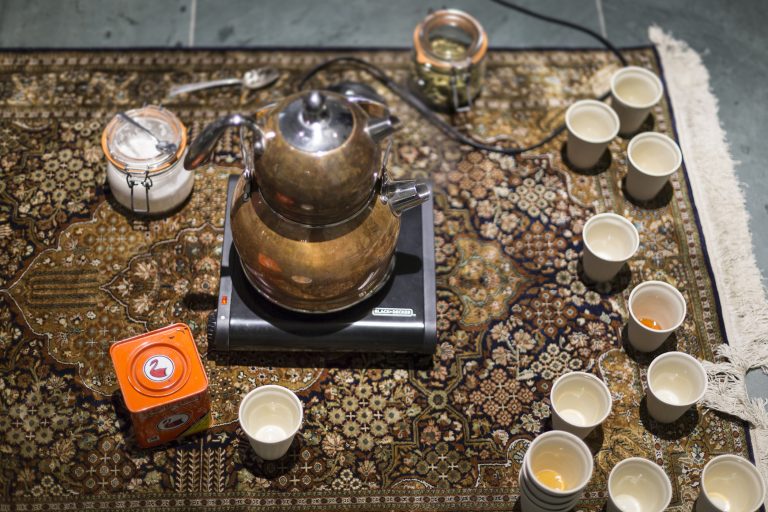 By Aaron Hughes and Amber Ginsburg

The Global War on Terror has had repercussions in nations around the world alongside communities in the US, including in Chicago. Through similar training programs, weaponry, surveillance technology, interrogation techniques, and many other forms of policing, the counterinsurgency tactics employed by the US military and local police forces have increasingly resembled each other in our modern era. Aaron Hughes and Amber Ginsburg’s Remaking the Exceptional podcast highlights these similarities alongside the broader political context of the War on Terror to illustrate the ways such policies are connected to the reign of Chicago Police Commander Jon Burge, who oversaw the torture of hundreds of Chicagoans in police custody.

Sitting, sipping, and reflecting over a cup of tea with others can create the space for conversations on difficult and at times painful subjects. It also can create opportunities to envision a new set of social relations. This activity invites people to listen to an episode of the Remaking the Exceptional podcast over a cup of tea; to reflect and discuss the difficult topics the episode raises in a group; and to collectively imagine restoration, reparations, and justice.

Remaking the Exceptional examines local and international implications of state violence, while also uplifting acts of creative resistance. Through the voices of torture survivors and activists, this podcast highlights connections between policing and incarceration in Chicago and the human rights violations of the Global War on Terror, while also celebrating the struggle for justice and reparations.

In 2002, following the start of the Global War on Terror, the United States established an extralegal military prison at Guantánamo Bay Naval Base, Cuba. The prison was founded there to intentionally avoid US and international law. Since then it has been the site of major human rights violations, such as holding people for indefinite periods of time without trial and subjecting them to extreme interrogation methods, torture, and even death. Extralegal imprisonment and torture at Guantánamo is also directly connected to the Chicago Police Department through officer and Navy Reserves Lt. Richard Zuley. After subjecting Chicago’s poor Black and Brown citizens to torture for years, Zuley oversaw torture at Guantánamo from 2002 to 2004. But this was not the first time the Chicago Police Department had used such illegal tactics. Under the direction of police commander and Vietnam veteran Jon Burge, police subjected hundreds of predominantly Black men and women to torture between 1972 and 1991 in their Area 2 and Area 3 headquarters. After years of activism and investigation into Burge’s crimes, many Chicago torture survivors won reparations in 2015, making Chicago the first municipality in the nation to provide tangible reparations for racially motivated police violence.

Gather with your people, prepare and serve tea.

Play an episode of Remaking the Exceptional (approximately 30 minutes).

Each listener should use their own sheet of paper and a pen to take notes and/or make drawings during the episode. Pay attention to emotions, memories, ideas, and connections that pop up during your listening.

Once everyone has a cup of tea in hand, do a go-around in which each person is given the opportunity to share their general reflections on the episode. Then select three of the following questions to continue the conversation. During the discussion it is important to focus on active listening, speaking for yourself, and creating space for everyone to speak. Remember to take note of the time and allow approximately 20-30 minutes for these questions.

In larger groups consider appointing a notetaker and facilitator. The notetaker should pay attention to the themes and connections that emerge.

Refill your tea, if needed, as a transition from the first discussion to this final activity.

Once you have regathered, use the questions below as prompts to collectively imagine forms of restoration, reparations, and justice. During the discussion it is important to pull from your own experiences. Think about forms of care, compassion, and solidarity you have experienced. Also consider ways you can contribute to bring about restoration, reparations, and justice. Get as specific as possible in the discussion.

From your conversation, on a single piece of large paper create a group drawing or some other document that captures your group’s collective response to the questions above. How does the group envision bringing about restoration, reparations, and justice? Take a photo of your group’s work and submit it using the submission form below.

Listen to "Remaking the Exceptional"

Respond to Amber and Aaron's Prompt