By Tara Betts and David Weathersby 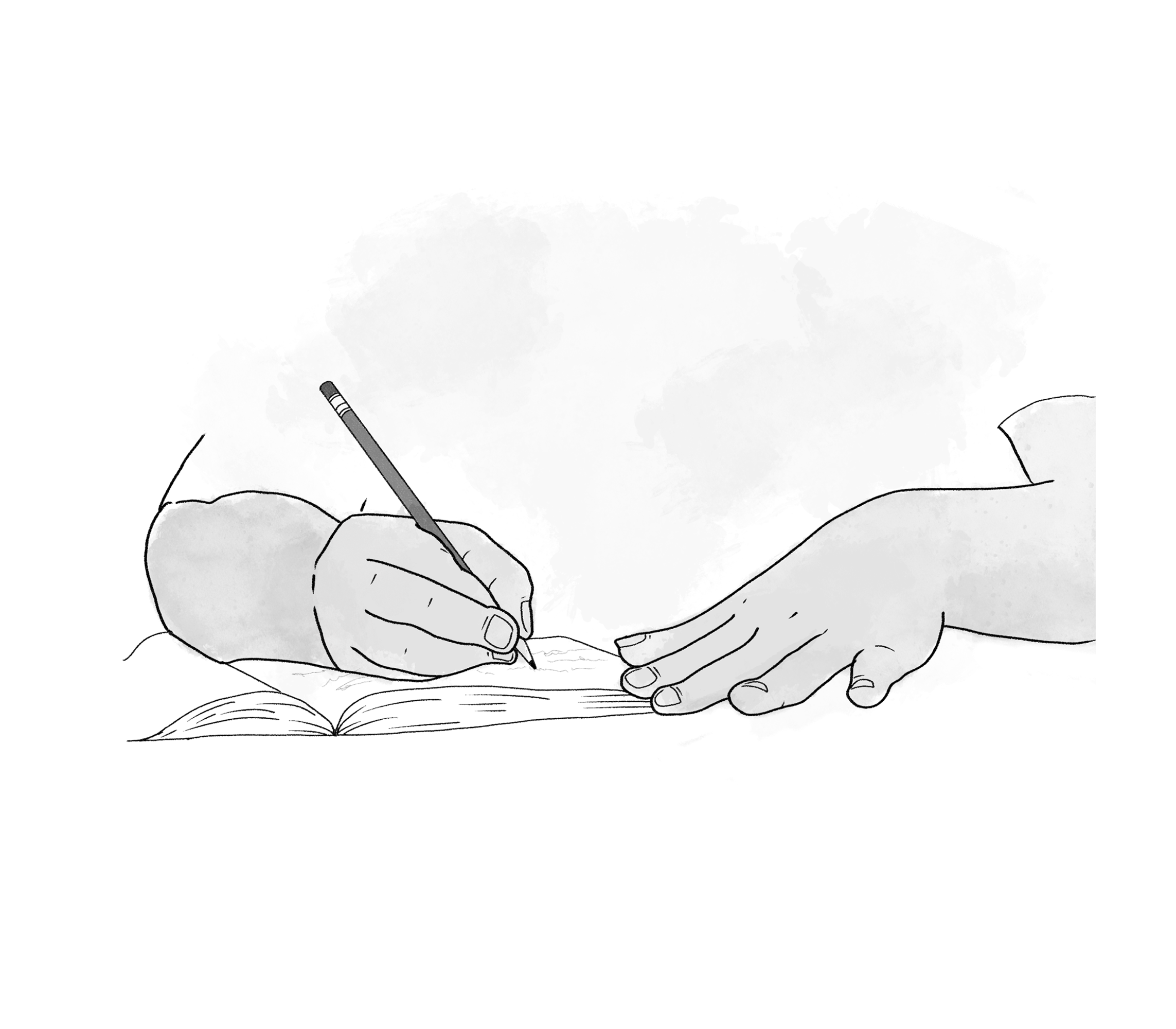 
Written and performed by Tara Betts

Albert is a gentle tower.
His arms arched over tabletop
like bridge beams or girders.

Even if he does not understand
everything he reads, he smiles
like a good kid, like the kid he
probably was 30-some-years
ago when he was in the wrong
car with the wrong people
at the wrong time that he will
never get back.

The attention to detail
borders on flawless.
Unscuffed white sneakers,
perfected lined fades
tucked under precisely
folded skullies immaculate
with what you got as a
clean, hard-fought pride.

One week, I bring
crisp folders
a bundle of sharpened pencils
with full pink erasers, round
and soft as a doll’s blush.
They rub away small errors,
clearing smudges from a page
like an actual correction.

I look for Albert’s easy grin first
when I walk into the concrete block
classroom. Locked in the education
building, relieved that the broken
window denies the cold like a plea.
One brother in blues with thermal sleeves
peeking out of the dull faded ocean
of cloth arching over his torso.

A cellmate hands me the slightly worn,
safeguarded, staple-bound book of poems—
the signature resolute and matching letters
of a poet’s name who strolled into prison
like a mother without fear of any child.

Margaret Burroughs—more than a decade
since she left the cell of her body. I clutch
her poems knowing how they passed
from her hands like a prayer. We both smile—
small illuminations in a dark hell—when
the cellmate says Albert wanted you to have this.
He got transferred. He knew you’d keep it safe.

Written and performed by Ciara Miller

Welcome to Sunnyside,
the marijuana dispensary in downtown Chicago.
You can almost miss its front door—discreet. Brown brick.
The street is blocked off for outdoor dining or festivals—
lessens the traffic. This region is jovial.
Mtume’s “Juicy Fruit” blares from my headphones just as it did
from the windows of my childhood west side apartment
where mama cooked her eggs sunny side up.
Mama loved the yellow yolk of the eggs, the runniness.
I prefer my eggs fried hard. Anything to remove me from the hen.

It was a sunny day in July when my mother came home dripped in sweat,
wearing denim daisy dukes and a wife beater.
She carried the switchblade in her hands
and said “I had to stab that motherfucka.”
She stabbed my sister’s father for pampers.
This was the beginning of police visiting the apartment,
her running into traffic with the baby.
me visiting her behind bars,
me visiting her in mental institutions for 16 years now.
They say the most violence happens in Chicago when it’s hot.

As a naïve child, I lumped together all the west side brown bodies
that were intoxicated off street meds as criminal.
There was no Sunnyside marijuana dispensary during my childhood.
In my eyes, there were weedheads, crackheads, and spiritually dark people.
I was high off too many D.A.R.E. commercials,
until I woke up in full blown conversations with myself.
Cursing in the shower, imagining a rumbling with an enemy each day.
That moment brought me to the Sunnyside dispensary.

My father ran away to Tampa 10 years ago.
I hadn’t seen him until recently.
I left him to the sun and palm trees believing men can always hunt.
I am culpable for loving him, but not leading.
The way he ate the ribs at our dinner outing,
like a starved child
and dipped his fingers in for the firecracker shrimp.
The way his pants could barely fit around his waist. The way his brain
seemed to waver like a feather floating between trees,
He craves more than sugar-coated marijuana.
I can see why he sometimes commits crimes to be incarcerated—
at least a guaranteed meal.

Mass incarceration is too textbook a topic.
To speak of mass incarceration as my brother
sits behind bars for activity that started off as a marijuana dispensary
without the building and government seal of approval, feels hypocritical,
yet I am still consumed by the disappointment that he missed three appointments
to study the GED with me.
Shamefully, I have Trayvon Martin’ed my own kin.

It was a semi-sunny day in April
when I first landed a job helping mothers
gain employment to improve generational poverty,
only the jobs paid minimum wage and many of the mothers had multiple children.
Mass incarceration is not a conversation to gullibly empathize with black men over.
Our black women are masculinized,
made into hunters without guns to shoot the chicken because the chicken
ain’t clucking on Chicago streets. So we steal the meat. Place it in backpacks
and walk through detectors hoping to not get caught, but we’re caught too often.
And our children starve in belly and are birthed deprived.

I am now at Sunnyside. I know that I got lost trying to get here.
There are sweat beads on my forehead. My Apple iPhone says that I have walked 3 miles,
misdirected trying to purchase berry gummies.
I know that I am leaving Sunnyside with a beautiful orange and white bag
as though I just purchased an expensive watch.
I know my father was never afforded the tools to own a dispensary like this,
but he supplied and took in similar drugs.
He has spent nearly every other year of his life incarcerated because of this.

I grew up on the west side of Chicago and Sunnyside is not a description fit
for that environment of cold brown brick.
There is no sunny side to generational poverty—generationally absent fathers and mothers.
Some families never recover from governmentally approved stigmas.

Written and performed by Khari Bowden

Is it working?
R the dangerous criminals being taken off the street

Or do they continue 2 grow
like weeds
when the roots – hidden below the surface
deep, spindly and branch-like
have not been removed

How well is it working
when the numbers show the largest prison population
on the entire planet
but without any significant drops in crime
or what “they” call crime
or have conveniently criminalized
2 bolster the numbers of chained bodies?

How can this possibly B protecting the “public”
& what part of all these punitive policies is preventative?
Was any of this ever about justice anyway?
Maybe the legislators R still lamenting the loss of the plantation
transforming slave ships N2 pens
& auction blocks N2 courtrooms
where all auctioneers still look the same

Who is this all 4?
Men made 2 go missing from families
long B4 the cell doors closed
Women finally equitably brought N2 a labor force
but N a way no longer called convict leasing
because privatization is so much more digestible
on the lips of a public who eat with their eyes closed

This is a system of jealousy
of fear
of inhumane, conceivably genetic viciousness
a preemptive attack on a people known 2 let others live in peace
It is a reflection of everything wrong with this occupied land
America is a trash, race-based caste
Held down by its inability 2 let go of its foot on the neck of its people

Can it B any wonder why so many able-bodied adults
mothers, fathers, children
unrealized creatives and geniuses never given the opportunity 2 grow
find themselves behind the barbaric jurisdiction
of the depraved
N the shape of cages that could only B tolerated
by a very sick society 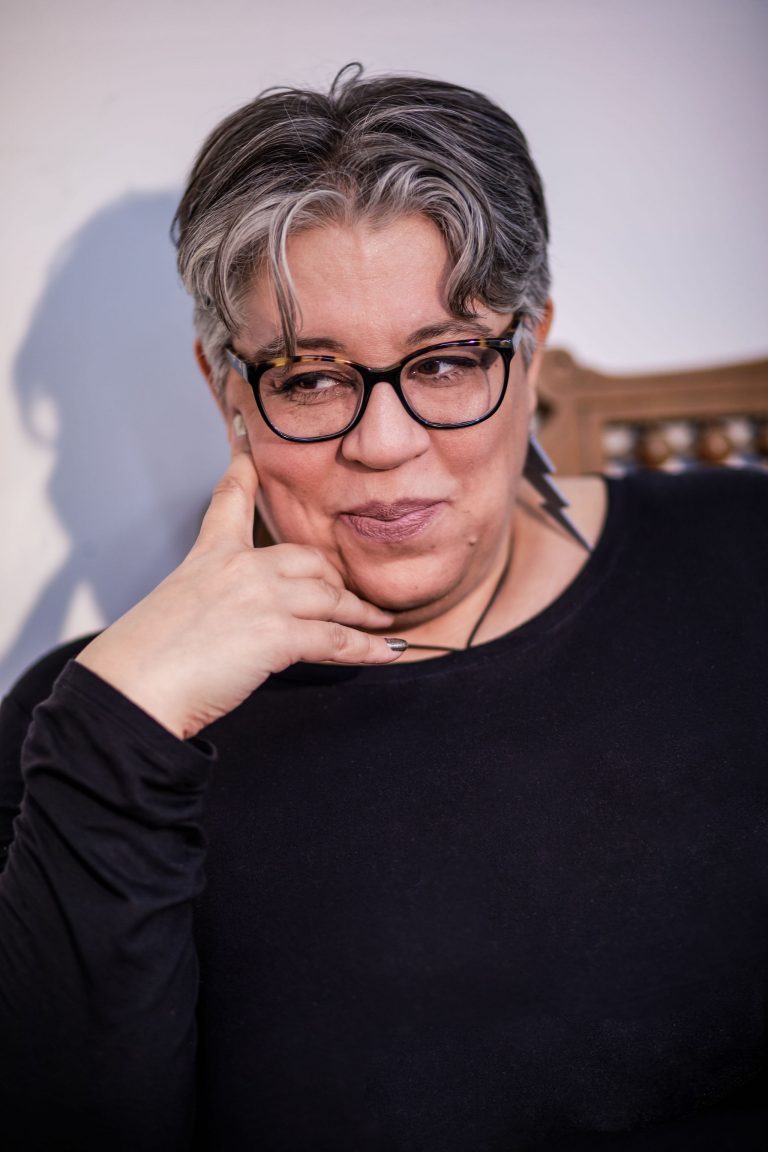 Dr. Tara Betts collaborated with David Weathersby on Unbarred Poetics. She is the author of the poetry collections Break the Habit, Arc & Hue, and the forthcoming Refuse to Disappear. She has also taught poetry workshops at Stateville Prison through the Prison + Neighborhood Arts Project, alongside writing workshops at Cook County Jail and Cook County Juvenile Detention Center through FreeWrite Arts & Literacy. Her work on literature and literacy is deeply entwined with inclusion, accessibility, and… David Weathersby collaborated with Tara Betts on Unbarred Poetics. He is a director and filmmaker and founder of City Vanguard, an arts organization that produces community-based documentaries for educational and cultural institutions. His past projects include the documentaries Got the Love, Jazz Occurrence, Thee Debauchery Ball, and The Color of Art. In 2018, he received a Black Excellence Award for best director by the African American Arts Alliance of Chicago.