By Amber Ginsburg and Aaron Hughes

In 2002, following the start of the Global War on Terror, the United States established an extralegal military prison at Guantánamo Bay Naval Base, Cuba. The prison was founded there to intentionally avoid US and international law. Since then it has been the site of major human rights violations, such as holding people for indefinite periods of time without trial, subjecting them to extreme interrogation methods, torture, and even death. The Remaking the Exceptional podcast examines local and international implications of state violence, while also uplifting acts of creative resistance. Through the voices of torture survivors and activists, this podcast highlights connections between policing and incarceration in Chicago and the human rights violations of the Global War on Terror, while also celebrating the struggle for justice and reparations. 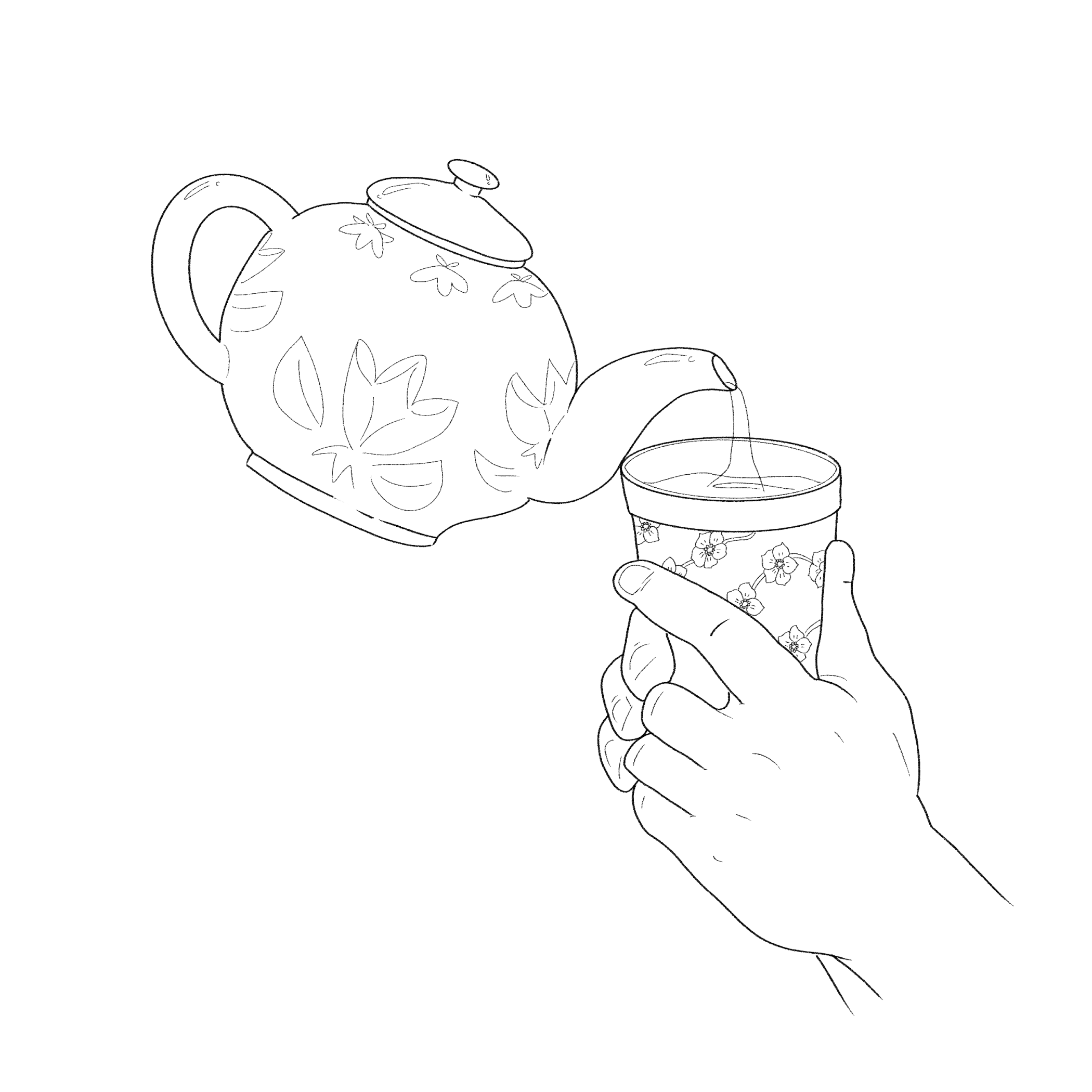 A new podcast by Amber Ginsburg, Aaron Hughes, and Nate Sandberg. The series originally premiered on January 11, 2022, marking the 20th year since the opening of the United States extralegal prison in Guantánamo.

The Remaking the Exceptional podcast examines local and international implications of state violence, while also uplifting acts of creative resistance. The setting for the first episode is inside Badr Ahmed’s* drawing of a table set for tea with no one there. We enter Ahmed’s drawing to join an imagined gathering of Chicago police torture survivors and Guantánamo torture survivors over tea. Connections emerge as Anthony Holmes, Moazzam Begg, Kilroy Watkins, Mohamedou Ould Slahi, Ronnie Kitchen, Sabri al-Qurashi, La Tanya Jenifor-Sublett, and Mansoor Adayfi introduce themselves and speak about their experiences.

*Badr Ahmed is currently imprisoned at the extralegal military prison at Guantánamo despite being cleared for release.

The setting for this second episode, “Maps, Memory and Violence” is inside Khalid Qasim’s* painting of a robust fire burning below a white box, an air conditioner, attached to a completely black wall. This high contrast painting documenting torture sets the stage for a conversation between torture survivors Anthony Holmes, Moazzam Begg, Kilroy Watkins, Mohamedou Ould Slahi, Ronnie Kitchen, Sabri al-Qurashi, La Tanya Jenifor-Sublett, and Mansoor Adayfi that exposes the way torture practices extend across time, space, and conflict. Specific attention is brought to Chicago police officer and Navy Reserve Lt. Richard Zuly whose torture habits establish direct connections between torture in Chicago and Guantánamo. Simultaneously, what emerges as exceptional is the creativity and resilience of survivors.

*Khalid Qasim is currently imprisoned at the extralegal military prison at Guantánamo despite being cleared for release.

The setting for episode three, “Poetry, Resilience, and Resistance” is inside Khalid Quasim’s* painting of a landscape framed by a house with a courtyard. The scene is from Khalid’s memories of his home in Yemen. The painting afforded Khalid a means, if only temporary, of being transported beyond the confines of Guantanamo where he is still currently extralegally imprisoned. With this in mind and with a cup of tea in hand we invite you to a conversation on the way art functions as a technology of resistance.

*Khalid Qasim is currently imprisoned at the extralegal military prison at Guantánamo despite being cleared for release.

The setting for episode four, “Ships, Contradictions and Confinement”, is inside Sabri al-Qurashi’s* painting of a ship in the middle of a chaotic storm. This tumultuous painting with bold brush strokes sets the stage for a conversation with torture survivors on the connections between the local and international torture practices. Specific attention is brought to the police to military and military to police pipeline. Simultaneously, what emerges are the acts of resistance that create space for international solidarity.

*Sabri al-Qurashi was extralegally imprisoned for 12 years at Guantánamo before being transferred to Kazakhstan.

The setting for episode Five, “Trees Solidarity and Struggle” is inside Muhammad Ansi’s* painting of a leafless tree blowing in a powerful firestorm. The tree is still rooted, still standing. Ansi made this painting inside Guantanamo where he has been extralegally imprisoned for 15 years. With this in mind, over a cup of tea, we invite you into Ansi painting to join a conversation on the meaning of justice.

*Muhammad Ansi was extralegally imprisoned at Guantánamo for nearly 15 years before being released to Oman.

The setting for episode six, “Flowers, Freedom and Justice” is inside Djamel Ameziane’s* drawing of a sprig of greenery. Each leaf delicately crafted, sits in a shining silver pitcher framed by a deep indigo wall. Djamel made this drawing inside Guantanamo where he was extralegally imprisoned for nearly 12 years. The bright reflection on the pitcher inspires us to reflect on all the experiences, struggles and dreams shared throughout this podcast and the need for justice, restorations, reconciliation, and reparations. With this in mind, over a cup of tea, we invite you into Djamel’s drawing to join a conversation on the meaning of reparations.

*Djamel Ameziane was extralegally imprisoned for more than 11 years at Guantánamo before being released. 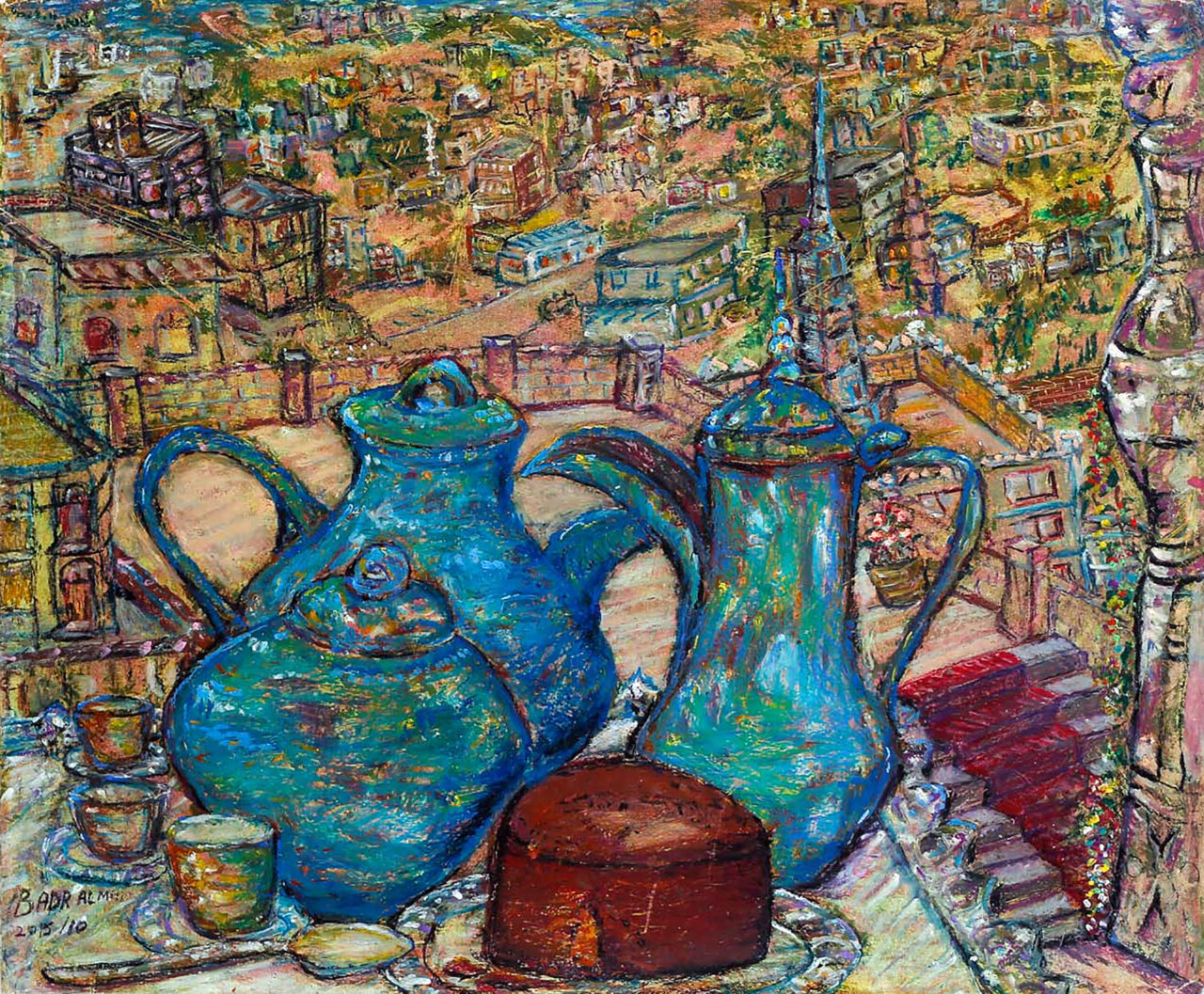 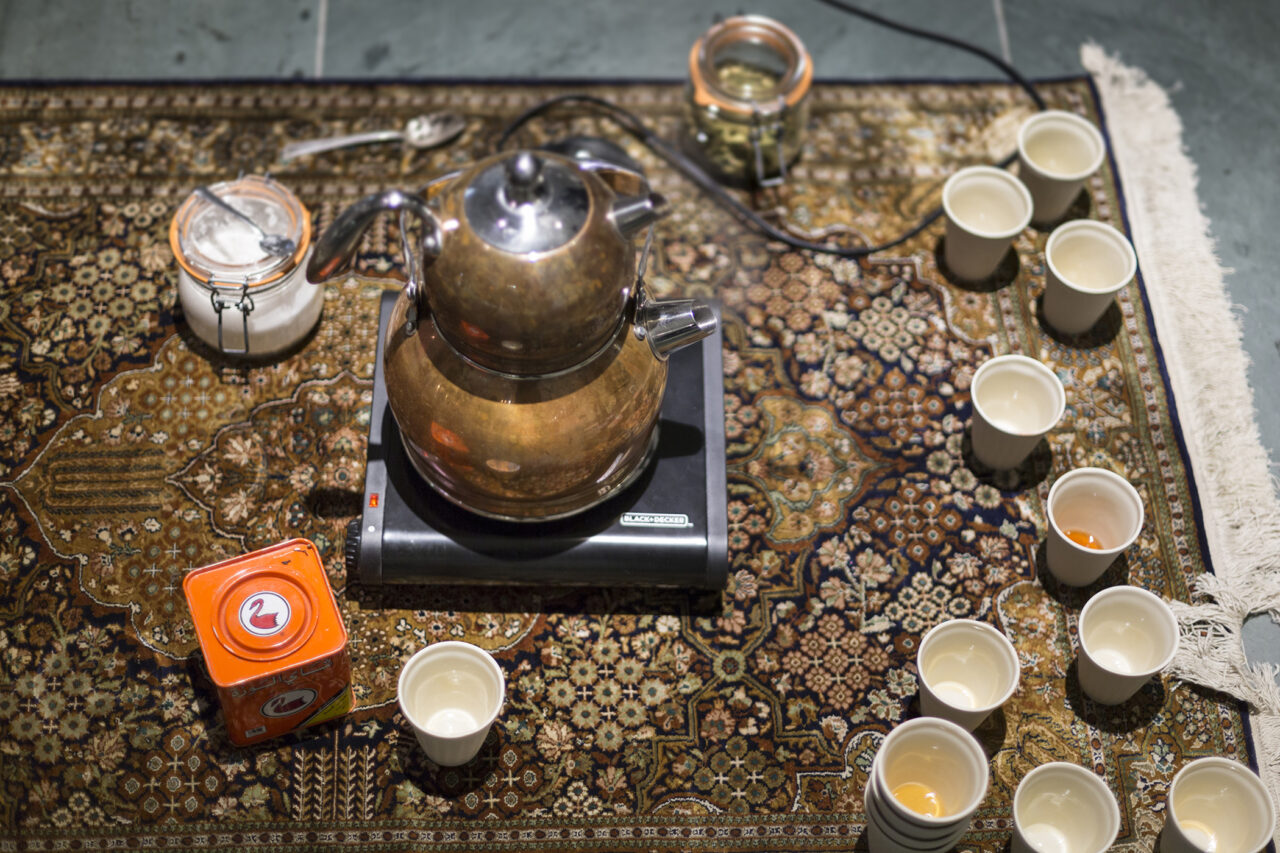 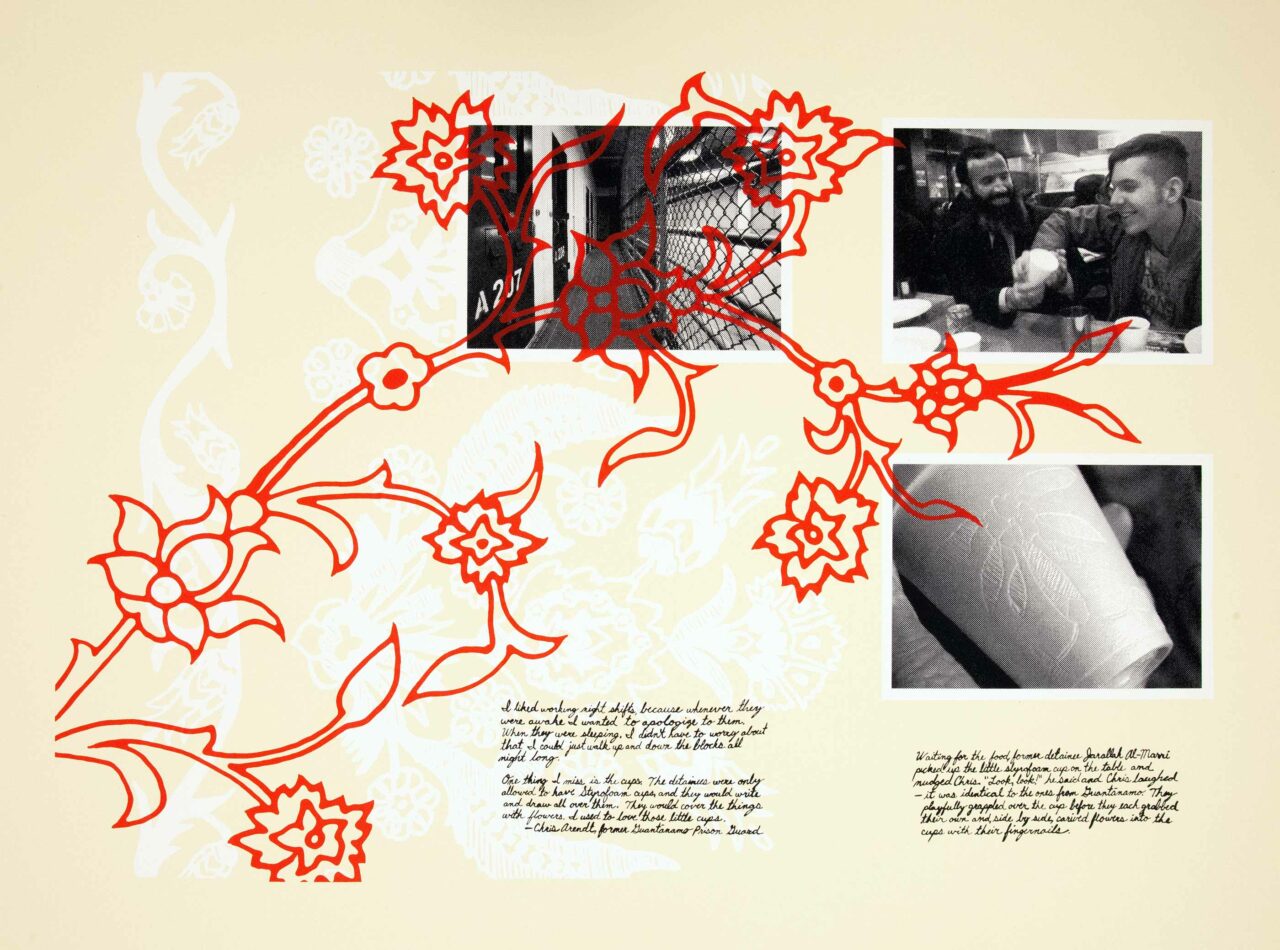 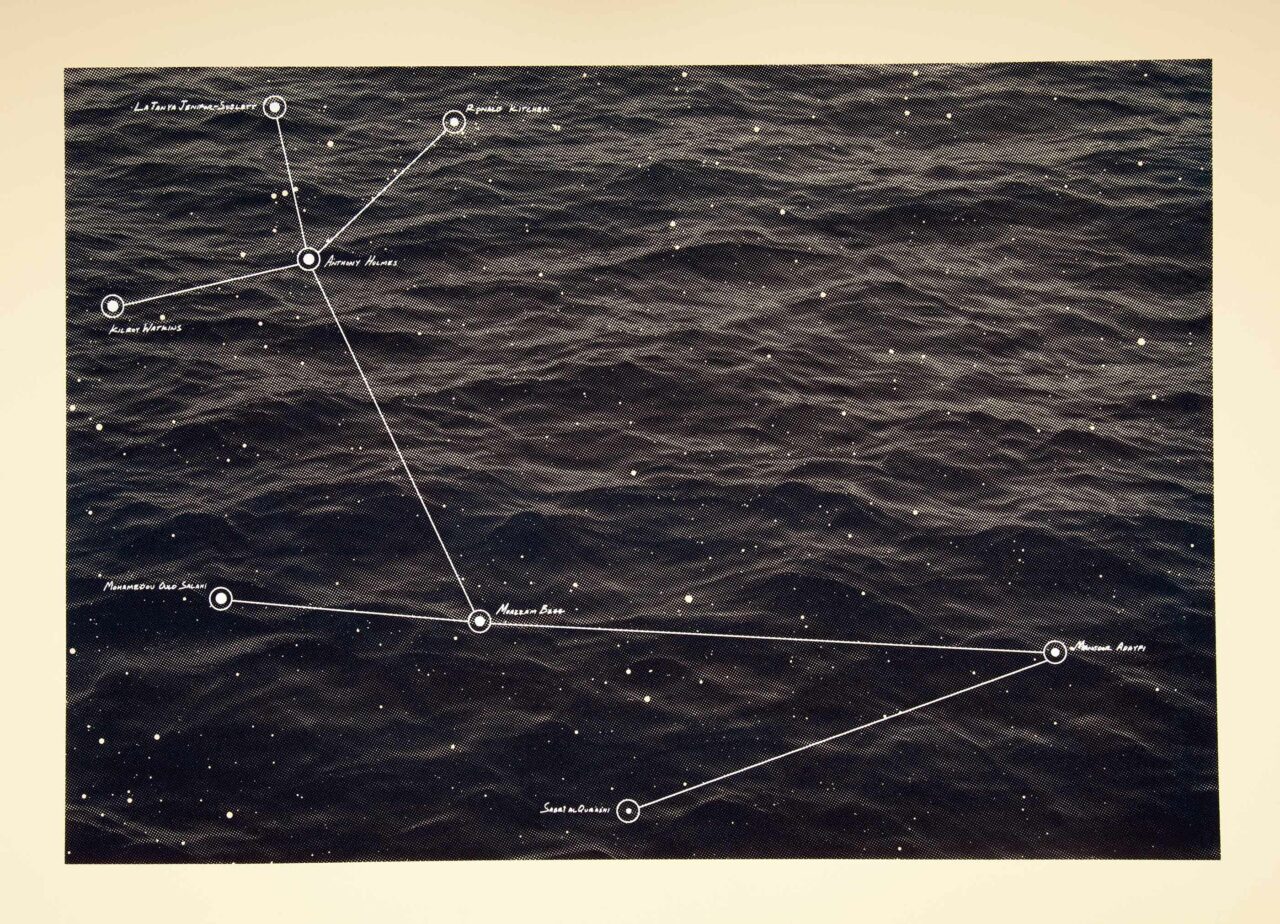 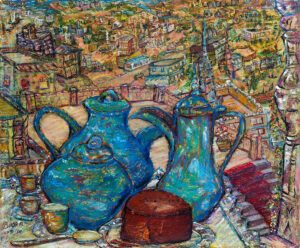 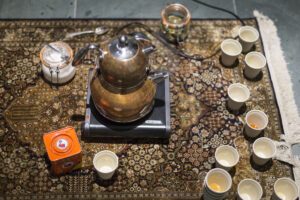 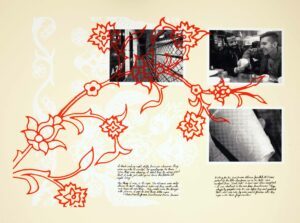 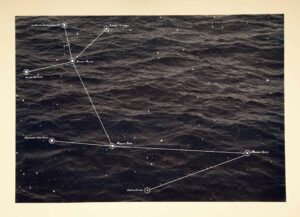 The Remaking the Exceptional podcast is produced by Amber Ginsburg, Nate Sandberg, and Aaron Hughes.

Featured cello music was contributed by Maestro Karim Wasfi from his 2019 Poetry Despite/Music Despite (Eternal War Requiem) recordings. For more information on those recordings and to listen visit poetrydespite.online

Research and research support for Remaking the Exceptional provided by Maira Khwaja from the Invisible Institute and Valli Perrera, Margaret Kates, Kelly Milan, Alex Shur, and Marie Mendoza from the Medill School of Journalism at Northwestern University.

Additional thanks to Alice Kim, Sarah Ross, and Joey Mogul for support and mentorship. 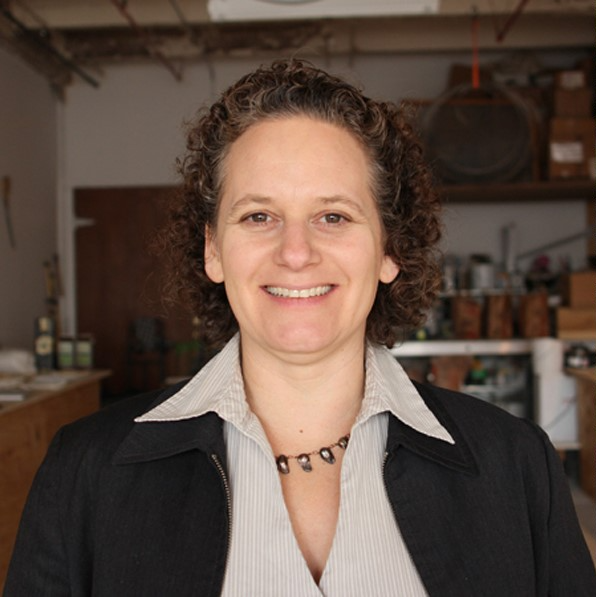 Amber Ginsburg has collaborated with Aaron Hughes on the Tea Project since 2009. She is a Chicago-based artist teaching at the University of Chicago. She creates site-generated projects and social sculptures that insert historical scenarios into present-day situations, as well as engage present day histories to imagine alternative futures. She often works with long-term and ongoing collaborators, and together they engage multiple communities and elicit working relationships with experts… 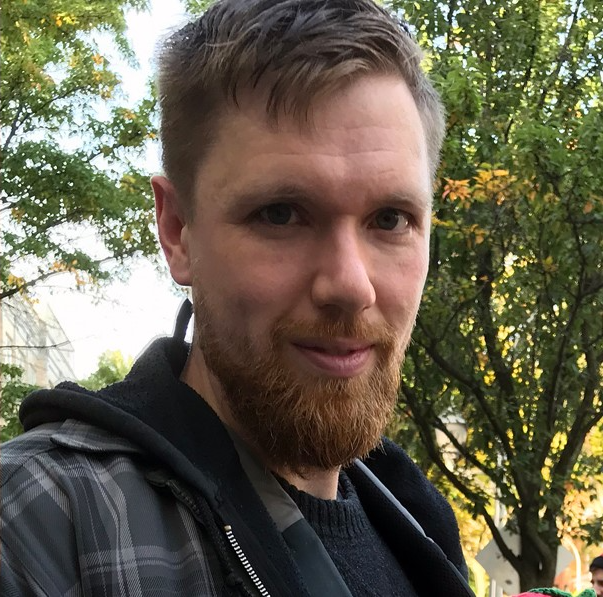 Aaron Hughes has collaborated with Amber Ginsburg on the Tea Project since 2009. He is a Chicago-based artist, curator, organizer, teacher, anti-war activist, and Iraq War veteran. He works collaboratively in diverse spaces and media to create meaning out of personal and collective trauma, deconstruct and transform systems of oppression, and seek liberation. Working through an interdisciplinary practice rooted in drawing and printmaking, Hughes develops projects that deconstruct militarism…